Changes on the Cut

Paul Quigley discusses some long-term trends in the local landscape (an article which first appeared in the local Arts & Heritage magazine).

Peter Donnelly’s 1960s images of Black Country canals, already startlingly different from the modern landscape, have caused us to think about the way in which the areas next to the canals are still changing.

It will have taken a long time. Perhaps as many as ten generations. But the landscape alongside the Black Country canals will, in the early 21st century, finally lose its particular industrial character and become more like the rest of the surrounding suburban expanse of the West Midlands conurbation.

The waterways themselves are among the great survivors of the local built environment. Conceived in the early Industrial Revolution, in an age even before American independence and the abolition of the Atlantic slave trade, the canals have helped bind the Black Country together for more than two centuries. Even today, long after the railways and roads first started to steal their role as industrial arteries, as much of half of their original length is still navigable. It is hard to point to another feature of the local Georgian landscape which has persisted so long.

So the narrow channels of water are in many cases still visible following their original routes. But what of the areas next to the canals, the landscape they were built to serve? This has seen more frequent and historic transformation. The reliable continuity provided by the waterways themselves has disguised a succession of rapid changes in the areas which are their immediate neighbours.

In the Staffordshire and North Worcestershire of the 18th century, one of the first changes in the ribbons of land next to the canals was the shift in industry from nearby rivers. Before 1770, industry tended to set up in the Tame and Stour valleys where it was often powered by water. But within a few years of the canals’ arrival, their wharves and basins were the new centres of growth.  This gave the zones next to the canals a different character to the rest of the wider area, which was otherwise still a network of towns and villages in a largely rural setting.

The Skeleton of the Conurbation
This overwhelming industrial function set these ‘canal corridors’ apart from their surroundings throughout the next two hundred years. Successive phases of industry occupied the prime locations of the canalsides—strings of iron furnaces, foundries and forges came and went and, in their aftermath, planned industrial estates were overlaid to formalise the purpose of the canalside zones. These winding, elongated industrial districts provided the skeleton around which the new conurbation grew.

But a more fundamental change was also underway. In the modern age, even into the current century, industry continued to locate next to the canals, but it no longer needed them. Instead it faced in the opposite direction, out to the motorways and urban dual carriageways.

This difference quickened the change to the design and feel of the canalsides in the second half of the 20th century. And, while earlier changes are less well recorded, this most recent renewal has happened within the lifetime (although not necessarily the memory) of the older half of the Black Country population. It has also been captured by local artists and photographers, many amateur, who have been interested in the changing landscape. One such was Peter Donnelly, whose photographs have recently received renewed scrutiny for their value in recording change.

The change in the landscape south of Delph locks - 1960s image (on the left) by Peter Donnelly provided courtesy of http://www.blackcountrynostalgia.com.

Three of his images of the Dudley Canal in Brierley Hill in the early 1960s illustrate the point. In turn they also happen to represent three industries which were the bread and butter of the Black Country. The first (top of page) shows a row of chimneys at what was the Round Oak steel works; the second (right) of a sunset over the flight of Delph Locks shows a mountain of spoil created by coal mining; and the third (below) captures anglers fishing in the midst of what is left of the brick industry.

The pattern of things to come? Peter Donnelly’s image of industry next to the Dudley canal in the early 1960s compared with the same scene today. In the centre of the picture a bridge carried the towpath over a canal basin serving a firebrick works. On the opposite bank the dome of a ‘beehive’ brick kiln was visible. In 2011, the same view is altogether more ‘natural’, with just a faint trace visible of the demolished bridge (1960s photo courtesy of http://www.blackcountrynostalgia.com).

All three photos are able to show clearly the legacy of industry. But visiting the same locations nearly fifty years later this legacy has evolved into a different pattern: one of greener, much more suburban settings.  The steel works has been replaced by Merry Hill shopping centre, the spoil heap has been flattened and covered with residential streets, the and the firebrick works replaced by public green space.

New Homes on Industrial Land
So the encroachment of residential suburbs (and the parks and shopping areas which serve them) into the historic industrial zones along the canalsides is already underway. But the process has also now been made official by the Black Country Core Strategy, the local authorities’ published plan for the area for the next fifteen years. To satisfy the high demand for new housing within the confines of the existing urban area, the strategy plans to use former industrial land at the centre of the Black Country, which happens to be next to the canals. 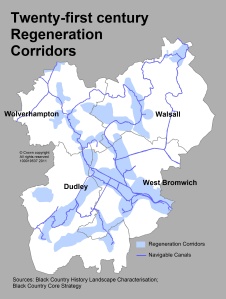 Designated ‘regeneration corridors’, the canalsides will include vast zones of new Black Country housing, in a pattern repeated across the local authority areas of Dudley, Sandwell, Walsall and Wolverhampton.

The move to more residential land use raises some uneasy questions about the understanding and preservation of the Black Country’s heritage. A positive point is that the canals themselves will now be just outside our doorstep—they will have the potential to be more accessible to local residents, no longer hidden within zones of often derelict or inhospitable industrial structures.

But even this approach will depend on housing developments being designed to maximise the waterways’ potential. We can see from the effect of 20th century industrial development that being next to the canal does not imply using it. Canals might still be treated as the overgrown back routes of housing estates, undesirable by day and perilous after dark. Much better that new housing draws on the potential for open, attractive, well-used waterside settings.

In any case the four local authorities are left with a common challenge in their approach to industrial heritage. Put at risk by the historic expansion of the suburbs on to the canalsides, the social, cultural and physical legacy of Black Country industry still needs to be understood and appreciated by new generations of residents. Certainly a significant challenge, but the legacy of 20th century artists and photographers is one tool in renewing this appreciation.

Paul Quigley is a landscape archaeologist with the Black Country Archaeology Service.